Somewhere early in my sales training, I heard someone say that sales is the oldest profession in the world.  Of course, there is that “other profession” that gets the title of oldest more commonly.

However, if you really think about it, sales is really the art of persuasion and that has been around as long as there were human communities.

In fact, I researched it quite thoroughly and found some fascinating quotes from many ancient and historic figures that still ring true today.

Reading the quotes below, it struck me that the concept of “consultative selling” is not new at all.  It’s literally been around for thousands of years!

“We have two ears and one mouth so that we can listen twice as much as we speak” —
Epictetus.

Aristotle described the three elements needed to move an audience–logos, pathos, and ethos

The Socratic Method is really the original art of consultative selling isn’t it?

“People are usually more convinced by reasons they discovered themselves than by those found out by others.”
Blaise Pascal

“Honesty is the first chapter in the book of wisdom.“
Thomas Jefferson

Sounds like it could also have been right out of the first chapter of “The Greatest Salesman in the World” by Og Mandino!

As well as this…

“The best way to find yourself is to lose yourself in the service of others.”

“The future depends on what you do today.”

“If you wish to win a man over to your ideas, first make him your friend.“
Abraham Lincoln

Can you say “Bonding and Rapport”?

OK, now I know where Tony Robbins got all his stuff!

“If you would convince others, seem open to conviction yourself.
Would you persuade, speak of interest, not of reason.”
Benjamin Franklin

All certainly words to live by!  And sell by!

Maybe that’s the lesson here.  Sure, there is always a new sales technique your sales manager is talking about or the latest sales book is trumpeting but, at any moment of any day, all you really have to do is what you have known how to do since you were a kid.  Take action, listen and try to help.

Oldest or not, it’s certainly a rewarding profession, spiritually and financially, when practiced the way the masters always have. 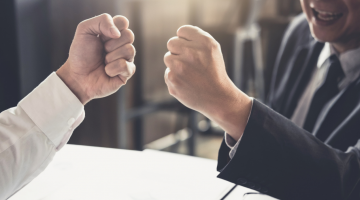